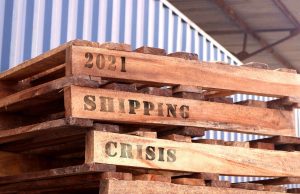 Anecdotally, in the last weeks of 2021, the supply chain problems, encompassing a huge swath of issues, may be getting better. Containers seem to be moving out of port-side facilities more quickly, ie “dwell time” has been reduced. An important question is whether the increased attention from Washington, D.C. has helped, hindered, or been irrelevant. The answer I get is that the industry participants have upped their throughput games after sensing that the Feds were up to something, or could be.

Just before Christmas, the White House touted improvements it had brought about, in summary of a “Convening” (a fancy word for meeting?) held with participants in its Supply Chain Disruption Task Force. These include Cabinet members (Transportation Secretary Pete B. looms large in these events, joined by Commerce Secretary Raimondo  and Agriculture Secretary Vilsack), National Economic Council Director Deese, and Port Envoy John Porcari. The bottom line may be that the marketplace participants have started figuring out (helped, by having an experienced “Port Envoy”- a good step, actually) how to increase “velocity” of box movements, on their own.

There is, of course, the worrisome backdrop of the Biden administration going beyond jaw-boning, and actually messing with the wheels of commerce, which could make things worse. Meantime-the threats of levies, by ports, on containers sitting around, likely fueled a stepped up tempo moving the boxes out and the reduced dwell times noted above. The free market in action- all good.

The White House summary of the pre-Christmas “gathering “– I like that word better, noted: “The President kicked off the meeting with remarks noting progress on supply chains and that fears about empty shelves during holiday shopping season have failed to materialize amidst record demand for goods because of strong collaboration between government, business leaders, and labor.” Well, maybe the media fear mongering of this past September and October created such dire expectations and- contributed, perhaps, to the perceived improvements.

One recent example of port pro-activity comes from the Georgia Ports Authority which has set up “pop up container yards”- where containers are stored away from the docks, at depots closer to their ultimate inland destinations. Similar strategies have been undertaken at Los Angeles and Long Beach, on the West Coast. In fairness to my critique on the Feds, they are helping here- bending the rules slightly for ports receiving Federal funding for other purposes to divert some of the funds towards building the “pop-ups”.  An early November release from the White House said: “With this policy change, the Georgia Port Authority will be able to reallocate more than $8 million to convert existing inland facilities into five pop-up container yards in both Georgia and North Carolina.”

The White House is only two miles from Capitol Hill, but oh, what a difference. In contrast to the cooperation which has emerged from Executive branch efforts, we have a disturbing Legislative effort underway. The Ocean Shipping Reform Act of 2021 (OSRA 2021) would bring greater scrutiny and, potentially, more penalties to ocean carriers, if enacted. The bill, which has already passed the House, and will likely pass the Senate, also empowers the Federal Maritime Commission to raise the bar on carriers’ and terminals’ abilities to impose  demurrage and detention issues. But this could slow things down, with lingering containers conflicting with supply chain sensibility. The American Association of Port Authorities’ (AAPA) CEO, Chris Connor (a guy with four decades of real supply chain experience) said in a recent podcast that AAPA could not get behind the bill as written. While OSRA 2021 would raise levels of regulatory effort and compliance steps on the carriers and terminals for demurrage and detention charges (supporting the objective of increasing the availability of empty containers available to exporters of agricultural and other cargoes), consider that Gene Seroka, who runs the port at Los Angeles, has said: “We are imploring liner shipping companies to bring in more and larger sweeper vessels to clear out these empty containers…” Yes, removing empties.

The recent news that ports will be receiving $241 million next year (with the promise a doubling of this in subsequent years, following the recent passage of the Infrastructure Bill) from the Department of Transportation (DOT)  is welcome- but will have no immediate impact on the present delays. Grants included in the mix, like $50+ million for Port of Long Beach, California from MARAD’s Port Infrastructure Development Program (PIDP), which will contribute to the Pier B On-Dock Rail Support Facility, which will expand the rail interface, will go a long way- but not right now.  All going well, it could online in 2025. Other PIDP-funded projects will benefit facilities in Houston, and Tacoma, Washington.  The administration has a Port Action Plan- which I think will yield additional cargo velocity benefits, going forward.

One not so publicized effort, which could also have longer term benefits, is a data project initiated by the FMC, apparently working in conjunction with the U.S. Digital Service (which normally works on improving information flows internally for processes like Medicare payments, for example), to develop a common denominator, and maybe create digital pathways for transport data. Automated flows of standardized data concerning container movements could enable better scheduling of pickups and drop-offs, with ties to chassis availability. This process of standardizing, or at least- streamlining of cargo flow data, will take time, but could have lasting positive impacts. Meantime, the OSRA 2021 language would empower the National Academy of Sciences (linked to the Transportation Research Board) to also study information issues, and report out on data standards within 18 months. Dueling supply chain studies- gotta’ love it. I only hope all these folks can agree on something.