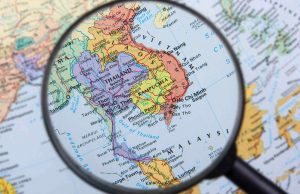 Economists have upgraded growth forecasts for major Southeast Asian countries in 2022, driven by election-related spending in the Philippines and the reopening of Thailand’s tourism industry.

But the COVID-19 pandemic continues to cast a shadow on full-fledged economic expansion, weighing on Malaysia’s growth forecast. Prospects of interest rate hikes in the U.S. and rising inflation can also destabilize the path to recovery in Indonesia and India, economists say.

Gross domestic product for the five biggest members of the Association of Southeast Asian Nations — Indonesia, Malaysia, the Philippines, Singapore and Thailand — will grow 5.1% in 2022, according to the latest quarterly survey by the Japan Center for Economic Research and Nikkei. That figure reflects a 0.1 percentage point upward revision from the previous survey.

The survey received responses from 38 economists and analysts and was conducted between Nov. 19 and Dec. 13, during which the first cases of the omicron coronavirus variant were confirmed.

Omicron, which scientists say can be highly transmissible, prompted governments around the world to scale back plans to reopen borders while they assess the efficacy of existing COVID-19 vaccines.

The 2022 GDP growth forecast for the Philippines was revised up from 6.6% to 7.1% — an increase from the 2021 projection of 5.1%, which was also upgraded from 4.3%. Economists attributed the upward revisions to declining COVID-19 cases and rising expectations for increased spending ahead of the May 2022 presidential election.

“I think one of the things that we look forward to this coming 2022 is the favorable [impact] of the national elections,” said Mitzie Irene P. Conchada, De La Salle University’s associate dean of the school of economics.

Thailand’s GDP forecast for 2022 was also revised up from 3.4% to 3.7%. The Thai government resumed international tourism in November, accepting vaccinated visitors and not imposing quarantine requirements. Thailand detected its first omicron case earlier this month but has not suspended its border reopening policy.

“Reopening effects and lockdown easing would encourage tourism activity and consumption,” said Somprawin Manprasert, head of the research division and chief economist at Bank of Ayudhya.

On the other hand, Malaysia’s economic growth forecast was revised down from 6.2% to 6.0%. This was mainly due to a lower than expected 4.5% economic contraction in the July-September quarter after the government imposed stricter lockdowns to stop a third wave of COVID-19. However, the survey does not include economic impacts from flooding that occurred this weekend, which forced tens of thousands of people to evacuate.

Economists still expect Malaysia to log a full-year GDP growth rate of 3.3% in 2021 and continue the momentum next year. “We expect that the improving domestic COVID-19 condition, the full reopening of the local economy, the continuous recovery of external demand, and the sustained support of fiscal measures will promote a strong recovery in domestic demand and GDP growth in the final quarter of the year,” said Wan Suhaimie bin Wan Mohd Saidie, head of economic research at Kenanga Investment Bank. “In particular, the economy will likely remain supported by the manufacturing sector, the ongoing technology upcycle and relatively high commodity prices.”

India’s growth forecast for 2022 was also revised downward from 7.5% to 7.3%. It will mark a slowdown from the 9.5% growth expected in 2021. Sonal Varma and Aurodeep Nandi, economists at Nomura India, said the outlook is mixed. “Supply-side bottlenecks are bogging down production alongside signs of weakness in demand for mass consumption goods,” they said.

Indonesia’s GDP growth estimate remained unchanged at 5.0% in 2022, up from a projected 3.5% this year. “Indonesia’s economic engine will shift from external trade to domestic demand starting in 2022 onward, providing a healthy environment and stable politics,” said Wisnu Wardana, economist at Bank Danamon Indonesia. He also expressed hopes for an increase in foreign direct investment from the omnibus law that Parliament passed last year aimed at cutting red tape.

While prospects for economic recovery are strong, the survey made it clear that COVID-19 remains the biggest risk in most parts of Asia.

“COVID shock” was cited as the number one anticipated risk for all six countries in the September survey. It continued to remain the top risk in Malaysia, the Philippines, Singapore and Thailand in the latest survey.

COVID shock fell back to the third spot in Indonesia, behind U.S. monetary policy and rising government debt. The U.S. Federal Reserve recently signaled it would end its asset purchase program in March rather than June, raising the possibility of a rate increase in less than three months.

The possibility of a U.S. interest rate hike can put pressure on the rupiah through capital outflow. “It can destabilize the external equilibrium of the rupiah,” said Dendi Ramdani, head of industry and regional research at Bank Mandiri. Economists predict that India, Indonesia, Malaysia and the Philippines will start raising interest rates in 2022.

In India, inflation became the top anticipated risk, with COVID shock retreating to second place. Economists cited concerns over energy supply due to a decline in coal inventories going back to October. Coal accounts for about 70% of India’s energy mix. Tirtankar Patnaik of the National Stock Exchange of India stressed that the “ongoing energy crisis and persistent supply-side disruptions may continue to pose upside risks to core inflation.”