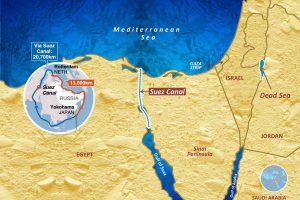 The Suez Canal Authority reported record annual revenue of $6.3 billion in 2021 despite headwinds from COVID-19 and the grounding of the Ever Given, which shut the waterway for six days back in March 2021.

The waterway also recorded its largest-ever annual net tonnage of 1.27 billion tons, for an increase of 8.5% compared to 2020, with 20,694 total ship transits for a year-over-year increase of 10%.

Chairman of Suez Canal Authority, Osama Rabie, said the rate of increase in volumes transiting through the canal, measured in tons, exceeded that of global trade growth, which amounted 3.7%, according to Clarksons.

The Suez Canal Authority in November announced a 6% toll hike, starting in February 2022, for all sectors with the exception of LNG and cruise ships. Rabie said this week the hike is expected to raise an additional $400 million annually for the canal.