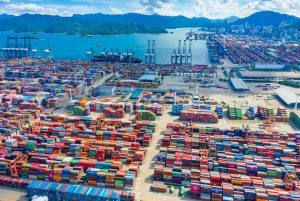 The backlog of vessels waiting to reach berths at the Port of Yantian, the largest container port in China, is gone since terminals returned to full operations on Thursday following a COVID-19 outbreak among dockworkers that significantly curtailed operations, according to an official at shipping giant A.P. Møller – Maersk.

But shippers shouldn’t expect supply chains to be immediately repaired. While Yantian officials believe they can eliminate the accumulation of stacked containers within a couple of weeks, the backlog of shipments piled up in factories and warehouses elsewhere in the Shenzhen region will take at least a month to clear, Akhil Nair, vice president of global carrier management and ocean strategy for SEKO Logistics, said during a press briefing last week.

“The backlog is physically impacting production at factories because they simply don’t have warehousing space to store finished goods that can’t ship out on time. Pretty much every forwarder or logistics provider that has a facility at any major seaport is being utilized for temporary storage,” he said.

Yantian International Container Terminals on Thursday began accepting vessels at all 11 berths after running the port at 30% of normal productivity since the third week of May. Earlier this month vessels were waiting up to two weeks for a berth.

Port officials said the number of laden containers allowed to enter the port by truck will increase to 9,000 per day after restricting movements to about 4,000 to 5,000 containers. In an effort to move cargo dwelling on the docks first, they are placing a seven-day window on new cargo entering the gate based on a booked vessel’s estimated time of arrival.

“There’s no backlog of vessels now, no waiting at anchor anymore. Berth availability is at 100%,” Maersk spokesman Thomas Boyd said in an email.

The reopening of Yantian is also bringing down wait times at the nearby ports of Shekou and Nansha, which had been handling much of the vessel overflow during the past month.

The slowdown in productivity has had a huge impact on global freight transportation. The system was already straining to keep up with a prolonged surge in demand bumping up against infrastructure, equipment and labor limits that have left ports overwhelmed and led to vessel delays, which put strong upward pressure on freight rates.

Hundreds of vessels skipped South China ports to avoid waiting at anchor seven days or more for a parking spot. In mid-June there was a estimated backlog of 160,000 containers, or about 320,000 twenty-foot equivalent units, Nair said. On average, about 15% to 20% of containers are getting rolled over to a future vessel sailing because carriers are overbooked and are prioritizing freight based on profitability or operational considerations.

Ocean executives at Flexport, a rapidly growing freight forwarder based in San Francisco, said in a presentation last week that shipping times have more than doubled this year. The transit time for an intermodal move from Shanghai to Chicago via Southern California ports, which typically takes 35 days, is now 74 days.

Ocean shipping experts say the cascade of released freight from Yantian will soon add to port congestion and vessel delays at major ports around the world, including in the U.S.

Carriers are now rediverting vessels back and resuming port calls in South China, Nair said. Ships coming to pick up export loads are likely to get first priority over vessels with empty containers to discharge so the terminals can reduce container density in their yards, he added.

Trucking restrictions in South China haven’t eased, with drivers still required to get COVID tests if they are bringing in containers from other provinces. The Port of Shekou, for example, will not accept any drivers who previously had been to Nanshan. Some terminals in the Dachang Bay area say drivers need to have a Shenzhen registration on their license plate and that they will hold drivers for 48 hours until test results are received.

While vessels stacked up in open water waiting to enter ports have gained media attention, out-of-public-view congestion is moving from the ports onto the factory floor.

Manufacturers in Asia are operating at full tilt as economies continue to reopen from the pandemic and consumers, flush with savings during the pandemic, flock to shopping from the convenience of their homes. After splurging on exercise equipment, electronic devices, hot tubs and other items for home recreation and offices, shoppers are buying makeup, clothing and luggage — things that improve their appearance in public or their travel experience. Meanwhile, businesses are increasing purchases of computers and machinery.

Products are being sold so fast, in many cases, that companies can’t restock shelves after inventories were depleted last year and face large order backlogs.

One furniture brand, for example, has sold out of inventory and can’t get replacements before August, said Brian Bourke, SEKO’s chief growth officer, in an interview during the spring. Another customer sold out of its top-selling fitness product.

101 Mobility, which provides home-access solutions for people with disabilities, has seen lead times to get ramps and other supplies go from several days to several weeks, with one manufacturing saying it can take three to four months to fill orders, Preston Holland, a business development manager, said on Friday’s edition of “What the Truck?”

SEKO Logistics has three warehouses in Shenzhen that are completely full with products that were supposed to be stored on a short-term basis but have been there for months, Nair said.

Retailers and other U.S. importers “want their purchase orders to continue to be manufactured and the suppliers are threatening to stop production if they don’t move the cargo out of their premises. That is leading to the increase in demand for warehousing space, particularly bonded warehousing space,” Nair said.

SEKO Logistics is advising clients to pull the trigger and execute purchase orders now for goods they need later this year, because supply chain delays combined with backlogged factories mean lead times could be six months or more compared to three months before the pandemic.

“There’s a lot of risk out there. But it seems the greater risk is not having any inventory to sell,” Bourke said.